A GIRL LIKE I: Unruly Women, Masquerade and Mimicry

With thanks to Kathleen Rowe for her wonderful 1995 book The Unruly Woman: Gender and the Genres of Laughter, from which the below quotation was taken:


[Gentlemen Prefer Blondes’] faithfulness to the structure of gender inversion is most evident in the dominance of the female couple, at a time when a female star could rarely carry a film alone. Hawks’s interest in “female buddies” is similar to that shown in his earlier His Girl Friday (1940), a revision of The Front Page (1931) in which he turns the male buddies into a heterosexual couple by making one of them, Hildy, a woman. The buddy mystique clings to Dorothy [Jane Russell] and Lorelei [Marilyn Monroe] who have been described as strutting their wares like a couple of gunslingers [by Molly Haskell]. They know what their weapons are, they know how good they are, and they’re loyal to each other, above all. Dorothy is Lorelei’s straight woman and sidekick, her shadow and chaperone. Her unruliness both completes and sets off Lorelei’s, representing the more familiar version of the romantic heroine, a bit world-weary but still a believer in love. The real love story, however, is between Lorelei and Dorothy. Not only does the film reserve its most spectacular visual effects for them, it also begins and ends with the two women dressed alike, performing together.

Such a bond between women is dangerous, and the degree of its threat most vividly indicated by Dorothy’s disruptive masquerade of Lorelei in the French court. Courtrooms offer ideal sites for unruly challenges to patriarchy and the authority of the law, and this one is no exception. The darkness of the surroundings, meant to convey tradition, and the old male judges in wigs and black robes heighten the impact of Dorothy’s blonde wig and silver spangles. In this scene, Dorothy’s multiple masquerade—of Lorelei playing the dumb blonde—shows the easy identification between the two women. “Life is sometimes hard for a girl like I, especially when she happens to be pretty, like I, and have blonde hair,” Dorothy whispers in a voice mimicking Lorelei’s. Mr Pritchard, one of the old lawyers, is suspicious, but like Hopsy and the other “mugs” of the earlier comedies, he cannot see past the surface—the wig, the exposed leg, the simpering voice. A close-up of her face under the wig, however, shows Dorothy as a drag queen, suggesting that the dumb blonde is only a more exaggerated masquerade of a femininity constructed to please, and appease men. In a reprise of “Diamonds are a Girl’s Best Friend,” Dorothy stages her own version of the song by abruptly throwing off her fur coat to expose her body dressed in a skimpy black costume with silver fringes on her breasts and hips. She performs the number with the bumps and grinds of burlesque, and a voice that growls rather than purrs like Lorelei’s. The performance draws on the camp elements of Mae West that linger about Dorothy, with her blunt interest in men for sex, her manipulation of her Olympic musclemen, and the masculinity suggested by Russell’s broad shoulders and deep voice. Mr. Esmond later expresses the danger of that image during his conversation with Gus and the real Lorelei. He describes the woman he saw in the courtroom as “That monster, Lorelei,” and the fact that there now appears to be more than one opens up the frightening possibility to him of an all-engulfing swarm of them—“How do you think I feel, with thousands of Loreleis coming at me from everywhere?”

Dorothy’s performance sends the courtroom into turmoil. When the judge restores order, however, it is a new order that has been brought about by Dorothy and that accommodates the desires of both women. In one blow she has cleared the way for the double wedding that concludes the film. Rather than doubly affirming the heterosexual couple, however, the ceremony is filmed to subvert it. Dorothy and Lorelei walk down the aisle together, dressed identically as they were in the opening scene, and singing a reprise of their song. Briefly, the two bridegrooms are shown standing by their sides, but then the camera moves closer in on Lorelei and Dorothy, excluding the bridegrooms and framing the two brides together in a celebration of the female couple.

Also see Laura Mulvey’s 2013 remixed version of her (primarily) visual analysis of a fragment of Gentlemen Prefer Blondes, in particular of the song and dance duet, “Two Little Girls from Little Rock,” performed by Jane Russell and Marilyn Monroe. At [in]Transition: Journal of Videographic Film and Moving Image Studies, 1.1, 2014: http://mediacommons.futureofthebook.org/intransition/2014/03/04/intransition-editors-introduction 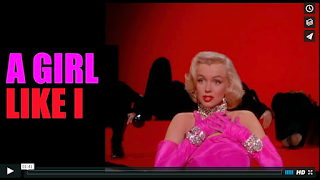 Posted by Catherine Grant at 23:47 No comments:

Fair Use and Fair Dealing